I (Donnie) grew up thirty miles North of Gallup, NM on the Navajo reservation. I lived on the rez for eighteen years of my life and fled right after high school. After graduating from college, entering the workforce, and living off the rez for many years I  find myself making my way back home as often as I can. Me and my family now live in Albuquerque, which is about two hours from home for me and Renee who grew up forty-five miles south of Gallup.

I grew up in a Navajo subdivision where my parents still live today. In the subdivision there are about 75 houses total within a few square acres. The houses vary in size, have gates and fences separating each house, and plenty of dogs. The surrounding environment is flat with dirt, small shrubs, sage and weeds. It might not be much to look at but the views are spectacular. 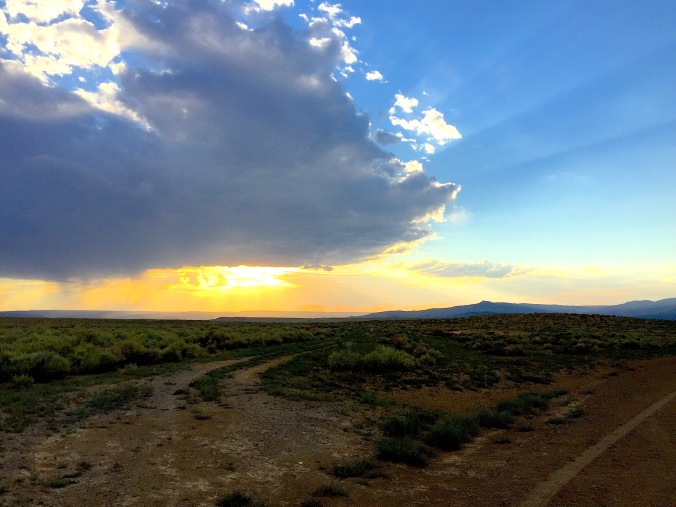 For most summers we try to spend as much time as we can with our families. We stay for days at a time with my parents at their home. During one summer while staying on the rez we were teaching our oldest daughter how to ride a bike without training wheels. While on the main road (there is only one) we hear someone honking. Then we look up to see a white van driving slowly down the one lane road. The loud honking and slow speed of the van made it a little creepy.

When the “creeper van” got close enough for me to see who was driving I waved and the van stopped. The driver rolled down the window and proceeded to tell me he was there to picking up local kids for Vacation Bible School (VBS). He said he was going to take them to the Baptist Church at Tohatchi, a community about fifteen-minute drive from where my parents live. The first thought I had was No freakin’ way are you driving off with my young kids in this creepy van.

After the close encounter of the Baptist kind (no pun intended, I have problems with all denominations), I began to reflect on why this person who is not part of our community thinks he can just drive up  and down the road picking kids up? I began to wonder what it would be like if  I drove a van through some suburban area unannounced and said I’m taking your kids away from here so they can learn about how the Navajo way of life? Then I thought if I did this I would make my van look like a picture a student drew up while working with Nations at NMSU (his name is Tristin):

Dr. Gene Green suggests, ““Short-term mission trips” lack fully engaging in communities, like Native North American reserves, in their culture, and linguistically.” Full engagement in communities, like on the Navajo reservation, needs to be built on the Navajo cultural value of relationships. Mark Charles, 2020 Presidential Candidate, has said Navajo people view everyone as either relatives or outsiders. It takes time, years even before an outsider becomes a relative. Guess where ministry happens? Yes! In the relative realm. There is this assumption that outsiders, especially Christians, have the authority to speak into the lives of Navajo people without attaining the badge or relative.

The Navajo people have come to know what the white vans represent: VBS, giving charity, taking pictures, teaching the kids some songs, and they leave with no lasting change. Instead of doing “drive by ministry” Church groups/missionaries, if they truly wish to affect change have to engage fully as a relative. Becoming a relative takes time and constant visits to the community.

To read about someone who lived on the Navajo reservation and saw their share of white vans, read: MISSION MODELS THAT EMPOWER: Take Nothing by Rachel Charles

Next Up: CREEPER VAN (PART II)

Donnie & Renee Begay have worked with Nations: A Cru Ministry, for over a decade. We’ve been asked many questions, mostly by non-Natives about our work and how they can engage with Native ministry. We can’t sit with everyone, but we can write our stories, make fun videos about culture, and let people in on our conversations with other Native leaders.